TRUDEAU’S VICTORY AND THE REVIVAL OF CANADA’S PROGRESSIVE TRADITION 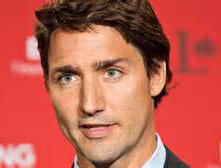 We have a new government and there is hope in the air. We can only hope that the politics of fear has been left behind. The generational paradigm shift should bring us out of a decade of denial, so that we can better embrace the challenges of sustainability.

There was confusion during the long campaign about what Canadians should do to ensure change. Mulcair’s NDP led the polls at the start, but by the end about 30% of its support had shifted to Trudeau. This wasn’t really “strategic voting” but part of an anti-Harper red wave.

More guarded NDPers remind us that Liberals often “campaign from the left and govern from the right”. And Trudeau did give mixed messages: willing to marginally raise the tax rate on “the 1%” but not raise corporate taxes, which, after Harper, are at a record low. And he campaigned without any targets on carbon reduction and still supporting the Keystone pipeline.

Rather than engaging in left-right semantics, we might want to look more closely at the progressive political tradition that re-emerged during the campaign. The Liberal’s decision to embrace tax reform and deficit financing surely stole some thunder from the NDP’s call for “change”. Will this prove to be another wedge used to garner votes? Or is something more fundamental being revealed about our country?

Party labels can confuse us. Look what Harper did to the meaning of “conservative”! Conservative “core values” no longer mean prosperity with compassion but greed, fear-mongering and authoritarian rule.

Also there have been some high profile cross-overs between Liberals and CCF-NDPers. Past interim Liberal Leader Bob Rae was previously Ontario’s NDP premier and NDP leader Thomas Mulcair was previously environment minister in a Quebec Liberal cabinet. Mulcair’s break with Liberals and his alliance with NDPer Jack Layton who led the 2011 “orange wave” were as much about pragmatism as principle.

Jeffry’s Simpson’s excellent Globe and Mail feature on Mulcair doesn’t paint him as a social democrat, but more as a fiscally conservative liberal, perhaps even a Red Tory. Some critics may even say that Mulcair not only campaigned from the centre but was turning the NDP into another liberal party. To be fair his advocacy for childcare, homecare and pharmacare represented “social justice” politics not espoused by Trudeau. And we should ever be grateful for Mulcair’s role in exposing Harper in parliament.

I’ve had personal experience with crossover politics. As head of the Saskatchewan New Democratic Youth I endorsed Hazen Argue for first leader of the NDP. I did this because Hazen, who I did some campaigning for in the Assiniboia area, was more critical of Canadian foreign policy (NORAD and NATO) than was Tommy Douglas at the time. I was later disillusioned when Hazen was appointed to the Senate and became a cabinet member in the first Trudeau Liberal government. I since have overcome my naïve youthful idealism.

It may come as a surprise that such cross-over politics occurred with Pierre Trudeau. When Justin’s father was battling the reactionary nationalism of the theocratic Union Nationale, prior to Quebec’s Quiet Revolution, he was a member of the CCF. Later he and several colleagues around the progressive journal Cite Libre decided to join the federal Liberals because they saw it as the only vehicle that could combat Quebec separatism. Once in power Trudeau drew heavily upon many progressive Saskatchewan civil servants from the CCF-NDP tradition. Many others, including my father, went on to do important international development and UN work.

There are other examples of parties working collegially. Remember that Brian Mulroney appointed NDPer Steven Lewis as UN Ambassador. We never saw such non-partisanship from Harper. It was strictly utilitarian when he appointed middle-of-the-road Manitoba NDP Premier Gary Doer as U.S. Ambassador.

After Harper, Canada needs all the progressive collegiality it can muster. This is required to achieve proportional representation (PR), to play a more positive, peacemaking and humanitarian role in international affairs and to start converting to a low carbon economy. It is required to tackle the systemic poverty and violence disproportionately affecting indigenous Canadians.

And all progressives in all parties need to quickly wakeup about the depth of the ecological crisis. After the dust settles from ten lost years under Harper, MPs will find that we are facing a serious crisis in the foundations of natural systems. Survival politics is going to become mainstream in the face of mounting extreme weather and the global water, food security and refugee crises.

Harper’s decade was so dominated by propaganda that upcoming generations and new immigrants were losing awareness of this progressive tradition. Saskatchewan has been one of the pioneers of this tradition, especially when it comes to healthcare, though you’d never know this when Brad Wall speaks about pipelines, nuclear power or GMOs. Or when NDP Opposition leader Cam Broten (mostly) doesn’t speak at all!

I now really remember a conversation when I was guest speaking with political trooper Ralph Goodale at a CWB fund-raiser at Raymore and asked him why he was supporting Trudeau as leader. His brief answer was because Trudeau could take back Ontario’s immigrant suburbs from Harper. Who would have thought that after Harper’s hateful islamophobic wedge politics the progressive tradition of multiculturalism, championed by Justin’s father and embodied in the Charter of Rights, would return to political centre stage?

The Harper era will go down in history as a major assault on our democratic and social rights. His corporate economism, repressive law and order-ism and militaristic “patriotism” were steadily eating into Canada’s progressive identity. And, though the prairies still look blue, Harper-backing Conservatives lost three Saskatchewan seats to the NDP. And more seats, including in my Regina-Qu’Appelle riding where notorious Omnibus Bill-enforcing Speaker Scheer was reelected, would have been lost if there had been serious strategic voting. Isn’t it time that concerned people across Saskatchewan began to seriously talk about a resurgence of progressive politics? Our sustainability and dignity depends upon it.

This piece is dedicated to long-time Wynyard Quaker activist and friend Bill Curry who died before he could witness Harper’s defeat.