PART III, WE STAND ON GUARD FOR THEE

In Part 2 of this series, I showed how Harper’s health, social and legal policies will result in widespread injustices for Canadians. In Part 3, I explore the corporate agenda that drives Harper’s politics. 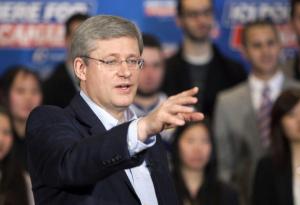 Harper will use his majority government to shift even more power to the corporate sector of the economy. For him the role of government is primarily to serve corporate interests; society serves the market rather than the reverse. With such a one-sided view it is little wonder that Harper has so little respect for democratic practices or policies which advance social justice.

The 2008 recession forced Harper to appear to abandon his simplistic “free market” ideology. However, he still designed his stimulus package in a pro-corporate way. Unlike other industrial countries he refused to use government intervention to help make the conversion to green energy to address the climate crisis. The tar-sands and the nuclear industry were big benefactors. Though Harper continued cutting funds to social programs like childcare, he broke his promise to cancel billions in tax breaks for oil companies making record profits.

His Economic Action Plan favoured the well-off, not those most in need; while over 300,000 Canadians lost jobs during the recession, the wealth of Canada’s 100 richest people grew to an average net worth of $1.7 billion. Most organizations surveyed said Harper’s stimulus plan had a neutral or negative effect; even the right-wing Fraser Institute was critical. The $16 billion surplus he inherited from the Liberals quickly turned into a $56 billion deficit which Harper will reduce on the backs of ordinary Canadians.

While pursuing his corporate agenda Harper has steadfastly blurred the lines between the “Government of Canada” and his increasingly centralized control, using a cadre of 87 unelected staffers in the PMO’s Office. Harper’s Action Plan ads were even designed to appear to be from the Conservative Party and the Canadian taxpayer continues to foot the bill for Harper’s self-promotion. In 2011 public servants confirmed that Harper had sent a directive for the “Government of Canada” to be renamed “The Harper Government”.

As head of the National Citizens Coalition (NCC) Harper advocated bank de-regulation along the lines taken by Republicans in the U.S. Thankfully he didn’t have a chance to do this for we would have suffered much more from the 2008 recession. But Harper’s rigid ideological commitment to de-regulation continues. While still a minority government he had already weakened regulations on pesticide residues on fruits and vegetables; new regulations coming from Agriculture Minister Ritz allowed food corporations to do their own labeling and safety inspections.

Tampering with food safety is a dangerous game. The listeriosis outbreak in August 2008, which the Sept. 16, 2008 Canadian Medical Journal linked to Harper’s deregulation of food safety, killed 17 Canadians. The contamination came from Maple Leaf Foods, one of the early companies to adopt the new regulations, which only required testing finished products once monthly.

Leaking Harper’s plans cost a Canadian Food Inspection Agency (CFIA) biologist his job. Legislation to protect whistleblowers would protect our health, yet Harper continues “muzzling” government scientists. Astonishingly, Minister Ritz commented that the real “whistleblower was the gentleman who turned in” the CFIA biologist. Ideology has replaced evidence in Harper’s anti-science approach to governing. In 2009 he cut scientific research funds by $138 million; in 2012 he pulled the plug on a world-renowned Arctic research station that monitors atmospheric changes.

Minister Ritz brought in Harper’s first majority government legislation, Bill C-18, to kill the farmer-elected Canadian Wheat Board (CWB). Though a Federal Court found that this legislation breached the rule of law, and a majority of Western farmers have voted in support of the CWB, Harper carries on concentrating power with the large grain companies. He uses empty rhetoric about farmer’s “marketing freedom”, but it will be agribusiness that gets the “freedom” to control the market. Though the huge potash corporations have their own “single-desk”, Canpotex, the CWB’s single desk is taken from family farmers, who must make an “individual choice” about where to market. The so-called “open market” will reduce the role of producer organizations and of the Canadian Grain Commission, which has given farmers some assurance of third-party quality control. Individual farmers will also be more vulnerable to the railways and could become pitted against each other in the “rush to the bottom”. Canada’s largest grain handler, Viterra, may soon be sold to a U.S. firm like Cargill or ADM.

Harper is also re-regulating in the interests of energy corporations. His Minister Oliver has attacked the right of Canadians to participate in environmental reviews of tar-sand pipelines; he consistently says that environmental reviews will be cut back. His double speak: “We respect the integrity of the regulatory process but we do need to get these projects approved.” Harper clearly wants to gut the Canadian Environmental Assessment Act (CEAA) and replace it with designated one-stop review bodies that are closely tied to industry.

Harper obscures his commitment to corporate “growth and profits” with his mantra of “jobs and growth”. This appeal to working people and small businesses is an attempt to distract attention from his political agenda. Such “economism” goes back to the Mulroney era with its rhetoric about work, family and nation, but Harper has taken this to new lengths. The claim that the benefits of corporate-driven growth “trickle down” to the general population does not hold up to serious scrutiny; it accentuates  inequality. In spite of the billions in wealth taken out of Saskatchewan by the uranium industry, the north remains the second poorest region in all Canada. Harper’s Alberta-style vision for Canada as an “energy superpower” will continue to distort the overall Canadian economy, creating divisions between Western provinces that export non-renewable resources and the rest. His highly contentious corporate agenda will put Canadian unity at further risk.

We already know what Harper’s policies do to “jobs and growth”. After receiving government subsidies and making $4.7 billion, an 80% increase in profits over 2010, Caterpillar had the audacity to demand a 50% decrease in wages from workers at its London plant. When workers refused the company shut down its plant leading to the loss of 450 jobs.

Exporting bitumen from Alberta to China will lead to a loss of home-grown, value-added jobs. Harper’s new immigration policy ignores the reunification of families and the human rights of refugees while privileging the labour force needs of corporations. Rather than respecting the collective bargaining process Harper consistently forces workers back to work. While Harper’s Minister Raitt recently stopped job action at Air Canada, CBC’s business co-host Kevin O’Leary went on a rant calling for the abolition of the unions and the firing of all employees. Those favouring Harper’s vision of an undemocratic corporate state are becoming more strident about their desire to trample on the rights and freedoms of Canadians.

Economic growth based on the sell-out of agriculture and non-renewable resources is not the path to a sustainable society. Harper’s backward-looking “vision” can be traced to the neo-liberal economics of the 1970s which ruthlessly embraced globalization as the means to expand the markets and profits of western multi-national corporations.  People throughout the world have learned the hard way that unfettered “free trade” is not “fair trade”; that privatization of public services is a disaster for the common good, and that corporate de-regulation threatens public and environmental health.

This is another wakeup call for Canadians.

Next time I’ll discuss what can be done to get the Canadian government back in the hands of the Canadian majority.